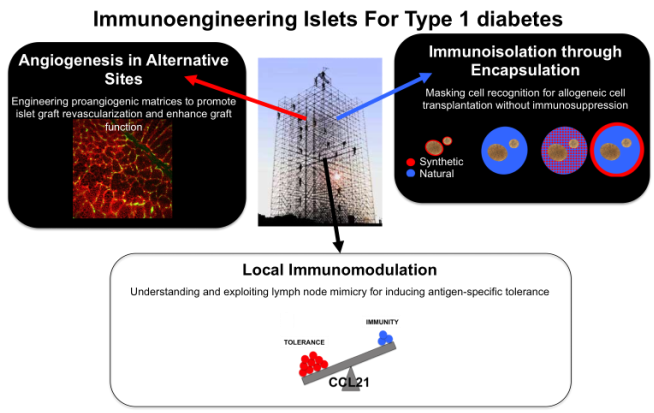 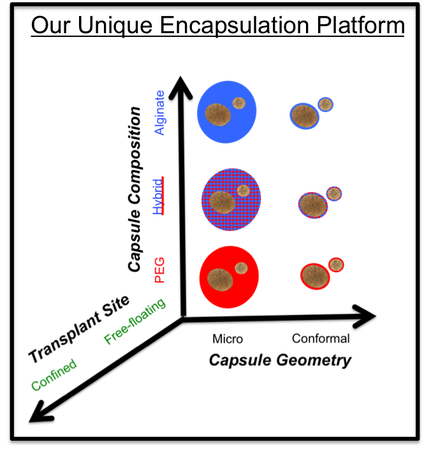 Development of more effective immunoisolation strategies to prevent rejection in allogeneic cell transplantation.
Type-1 diabetes (T1D) affects over three million Americans constituting a major burden. Replacement of pancreatic islets through transplantation may cure T1D, but it requires life-long immunosuppression, which is the leading cause of adverse events in islet transplantation, and graft survival is limited. Encapsulation of pancreatic islets may allow transplantation without immunosuppression and promote long-term islet graft function and survival. Capsule composition, geometry, and transplant site all impact capsule performance and graft outcomes. A systematic analysis of the specific contributions of each variable has not been performed because the necessary tools to manipulate each capsule variable independently were not available. Understanding the correlation between key capsule design parameters and capsule performance may explain the reasons for failure of previous islet encapsulation efforts and help identify the optimal combination of parameters that leads to a successful encapsulation strategy for transplantation without immunosuppression.  We have developed a new encapsulation platform for immunoisolation of pancreatic islets and transplantation without immunosuppression that allows investigating how capsule composition, geometry and transplant site affect the outcome of the encapsulated graft. As compositions we compare natural (alginate) to synthetic (polyethylene glycol, PEG) to hybrid hydrogels. As geometry we compare conformal (minimal thickness) to fixed-diameter micro (spherical and variable thickness) and double capsules. As transplant sites we compare free-floating (intraperitoneal) to confined space (fatty membrane pouches) implantation. The goal of these studies is to identify the optimal combination of capsule parameters for successful engraftment and long-term function of encapsulated islets for type-1 diabetes. 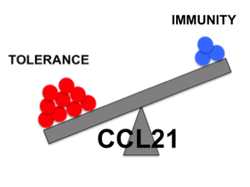 Development of novel means to promote immunological tolerance to allo- and auto-antigens.
​
Type 1 diabetes (T1D) is a chronic autoimmune disease leading to severe loss of pancreatic b cells and insulin secretion; loss of immunological tolerance towards self-antigens expressed by b cells has a critical role in the disease pathogenesis. Currently there is no treatment that allows reestablishing tolerance towards self-antigens, preventing or controlling islet autoimmunity, and ultimately curing T1D. On the other hand, tumors can induce tolerance towards antigens they express, and escape immune destruction. We have shown that tumor-mediated tolerance is dependent on local expression of the chemokine CCL21; we demonstrated that CCL21 promotes the formation of tolerogenic tertiary lymphoid organs (TLOs) that we named lymph node (LN) mimicry; these structures were also reported in the fetal pancreas and in tolerized grafts.

TLOs have also been shown to be sites of immune activation in the settings of chronic infection and autoimmunity (including in the pancreas of the non-obese diabetic (NOD) mouse). Overall, TLOs may be sites of stimulation or regulation of the immune response, but the mechanisms by which TLOs promote one or the other remain largely unknown. We are interested in the role of CCL21 expression as a mechanism supporting immune regulation in TLOs.

One approach to protect transplanted islets without the need for antirejection drugs is to create a protective barrier to hide the islets from the cells of the immune system that otherwise would destroy them.  We have made significant progress toward this goal, having invented and optimized new technologies to individually coat the islets, thereby camouflaging them from the recipient’s immune system. Such technologies allow wrapping the islets with minimal amounts of material to protect them during long-term implantation in the body. This is an exceptional improvement over encapsulation technologies previously developed that enclosed islets within large volumes of coating material and utilized materials that were not stable in vivo or toxic to the islets. The design of coating materials is very challenging because destructive immune system cells need to be screened out while oxygen, nutrients, glucose and insulin need to gain free access through the coating material. We tested several combinations and varying amounts of biocompatible materials such as PEG (polyethylene glycol). Initially, the pore sizes were either too large allowing the unwanted immune cells to destroy the islets or too small, suffocating the islets. After several modifications to the polymer composition of the coatings, we were able to protect transplanted islets from rejection while maintaining normal blood sugar levels in the experimental models. In these studies, diabetes was reversed in less than one week and the islets continued to function long-term, without the use of any anti-rejection drugs in mice. While working on the technology of the minimal capsule thickness (shrink-wrapping) conformal coatings, we also have demonstrated that the choice of the site for transplantation of encapsulated islets is critical for curing diabetes in mice. In specific, we found that transplantation in confined and vascularized sites can enormously improve diabetes reversal and blood glucose management of transplanted mice. Now, we are planning to build on our striking preliminary results and move our breakthrough encapsulation technology to clinical trials in patients with diabetes. To that end, we need to perform safety and efficacy studies in preclinical models of diabetes that closely resemble the human disease, which is the focus of this proposal. 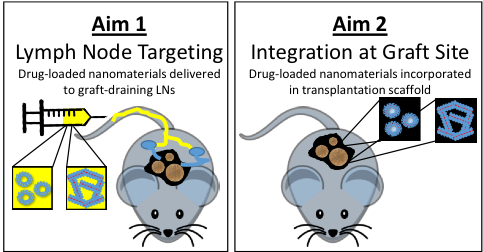 Nanomaterials have enormous potential in the treatment of medical conditions that could benefit from targeted and local drug delivery including cellular therapies for treatment of type 1 diabetes (T1D). People affected by T1D lose their ability to produce insulin as the β-cells of the pancreatic islets are destroyed by an autoimmune process and require ongoing administration of exogenous insulin. Islet transplantation can restore metabolic control in a manner that cannot be achieved by administration of exogeneous insulin, and this therapeutic approach is about to become an approved clinical treatment in the US for patients complicated by severe hypoglycemia. However, as in all organ and cell transplantations, a major impediment is the need for chronic and systemic immunosuppression, which is accompanied by undesirable side effects. Hence, if a localized immunosuppression and anti-inflammatory (LISAI) regimencould be established, the likelihood of graft survival will increase and the need for systemic immunosuppression will be minimized or even eliminated. However, most therapeutic candidates for LISAI, including most clinically approved immunosuppressive drugs, have poor water solubility and are difficult to deliver and maintain locally.
Aiming towards a clinically applicable LISAI platform that improves drug solubility, stability, and site-targeting, here, we propose to use nanomaterials with chemically customizable hydrophobicity for the sustained and local delivery of anti-inflammatory and/or immunomodulatory therapeutic agents.  The use of nanomaterial-based drug delivery systems (nDDSs) is one of the most promising approaches, and it can also provide immune-therapies that are localized to the vicinity of the transplanted graft or are targeting the draining lymph nodes. As part of a nanomaterial approach, we have synthetized amphiphilic copolymers made of PEG-PPS and PEG-OES. We showed that these can self-assemble into nanomicelles and nanofibers with tunable drug encapsulation capacity and allow spontaneous, rapid, and stable incorporation of therapeutics without the need for chemical conjugation. We demonstrated that these nDDS are non-immunogenic, non-toxic, and able to solubilize, deliver, and provide sustained release for hydrophobic cargo molecules. Finally, we also showed that our nDDSs can traffic to lymph nodes and target the immune cells residing there.
Building on these promising results, we propose two different and complementarynDDS-based LISAI approaches: in one, we will use and further optimize the nanomaterial platform for lymph node targeting, and in the other, we will optimize the nanomaterial platform for integration at the graft site. To ensure clinical translatability, we will focus on drugs that are already FDA approved and on nanomaterials made from polymer components known to be safe and nontoxic. As therapeutic cargos for these nDDSs, we will evaluate glucocorticoids as well as calcineurin- and mTOR inhibitors (cyclosporine and  sirolimus, respectively) because of our promising preliminary results. Further, and as an important innovation, we will combine our nDDSs with compounds having designed-in drug metabolism, as represented by prodrugs (such as beclomethasone dipropionate) and soft drugs (such as loteprednol etabonate), to further maximize local effects and minimize systemic side effects. Accordingly, we will explore two different nDDSs with up to five different cargo drugs, but following initial tests, we will only pursue the two-three most promising combinations. We anticipate our nDDS-based LISAI regimen to improve islet engraftment and long-term function and to minimize or even eliminate the need for systemically administered therapies together with their undesirable side effects allowing a wider applicability of islet and stem cell transplantation procedures. By combining our groups’ expertise in drug development, medicinal chemistry, pharmacology, immunology, and islet biology (Dr. Buchwald) and bioengineering, immunoengineering, polymer chemistry, and islet cell transplant (Dr. Tomei), we are very well positioned to achieve considerable progress along the proposed research lines. 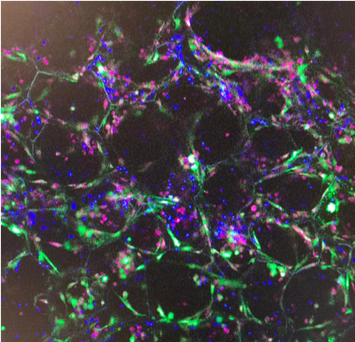 Type-1 diabetes is caused by autoreactive T cells that selectively destroy insulin-secreting cells in the pancreas. Loss of T cell tolerance to cells causes type-1 diabetes, but the underlying mechanisms are poorly understood, preventing the development of a cure for this disease. A major component of peripheral tolerance to prevent type-1 diabetes is the regulation of circulating autoreactive T cells in lymph nodes. Fibroblastic reticular cells (FRCs) form and remodel the lymph node reticula allowing its expansion during inflammation. Relevant to autoimmune diseases, FRCs are non-professional antigen-presenting cells that can induce antigen-specific tolerance by expressing and presenting antigens to specific T cells without co-stimulatory signals, leading to T cell engagement (stimulation and proliferation) followed by deletion.
Most studies have been done using transgenic mice for overexpression of artificial (not disease relevant) antigens in FRCs; thus, the role of FRCs in maintaining peripheral tolerance to disease-relevant self-antigens is poorly understood. We found that in type-1 diabetes, relative frequency, antigen expression levels and reticular organization of FRCs in lymph nodes are affected, potentially decreasing FRC-mediated tolerance. One goal of this proposal is to use innovative tissue-engineered FRC reticula with adjustable expression of type-1 diabetes-relevant antigens and reticular porosity to study how FRC antigen expression levels and reticular properties affect tolerogenic T cell engagement in vitro.
While professional antigen-presenting cells can switch to immunogenic phenotypes and promote autoimmunity, non-professional antigen-presenting cells like FRCs are less likely to do so because they do not express co-stimulatory molecules. Thus, promoting peripheral tolerance using FRCs will overcome limitation of professional antigen-presenting cells. Overexpression of type-1 diabetes-relevant antigens in genetically engineered 3D FRC reticula improved engagement of specific T cells compared to 2D cultures, but responses were more comparable to anti-CD3 stimulation (known to induce a tolerogenic phenotype in T cells because of lack of co-stimulation) than immunogenic stimulation by professional antigen-presenting cells. Promoting formation of FRC reticula expressing type-1 diabetes-relevant antigens was sufficient to induce tolerance and prevent type-1 diabetes in non-obese diabetic mice. Thus, a second goal of this proposal is to test whether we can delete autoreactive T cells from the systemic circulation to ameliorate type-1 diabetes by attracting them to the engineered reticula and by promoting tolerogenic T cell engagement by modulating FRC antigen-expression levels and/or FRC reticular properties. Even though these new structures will likely not recapitulate normal lymph nodes after implantation (not meant to), we expect that circulating antigen-specific T cells will nonetheless be engaged and educated by FRCs, resulting in diminished autoreactivity and disease amelioration, which is critical for therapeutic translation and highly significant for type-1 diabetes. 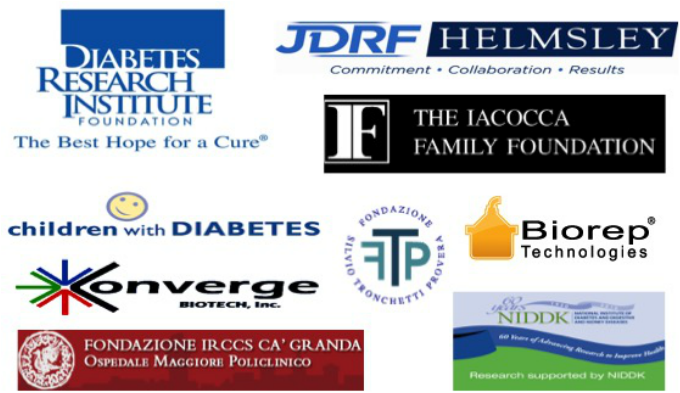